What is Press Punch Dies & How Does It Work?  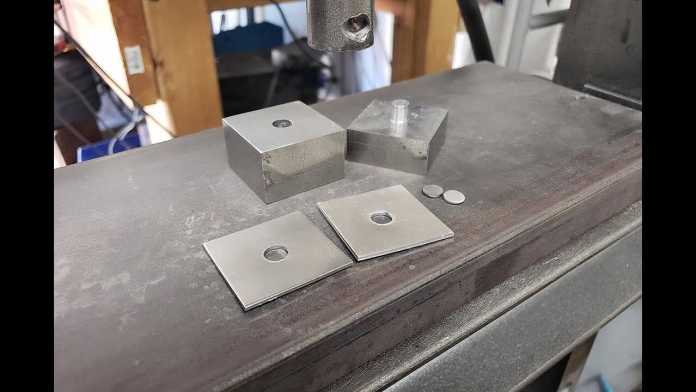 Punches are basic instruments that are driven through a material, usually sheet metal, by a punch press to generate quick, precise holes. Carbides or tool steel are commonly used to make punches. The majority of presses are mechanically controlled, however simple manual punches are also utilized.

Press punch dies are widely used to cut through material and into dies. The workpiece is held in place by a die, which specifies the shape generated by the punch. Die sets are frequently tailored to the specific object being manufactured. A punch press may be used if a particular type of raw material is too difficult to cut manually.

A press punch dies is one of much equipment used by manufacturers to manipulate and convert raw materials into finished products. This big, heavy-duty machine can quickly cut through hard materials, including metal, leaving holes in the same form as the die from the punch press. Let’s know about press punch dies in detail.

A punch press is big equipment with a hydraulic-powered ram at the top. It usually has a front-facing workstation where a single worker can operate the ram. The workpiece is squeezed against a fixed, stationary die when the worker engages the ram. This produces a hole in the workpiece as well as a new item with the same form as the die.

Punch presses are particularly effective for mass-producing small things from raw material with a consistent shape. Even if a worker can manually punch holes in workpieces, a punch press is a faster and more efficient solution.

Press punch dies setsare essential for punch presses to complete their intended punching operations. There are male and female dies in a die set. One of these dies is positioned above the workpiece, while the other is positioned beneath it. By forcing the punch through the die, the hydraulic-powered raw makes a hole in the workpiece.

CNC-controlled press punch dies, like other CNC-controlled devices, allow businesses to streamline their production processes. Manufacturers can program a punch press to run automatically rather than manually running it. Although CNC-controlled punch presses still require some human intervention, they are capable of automating numerous operations that would otherwise necessitate the use of a human.

Hydraulic press punch dies use a hydraulic cylinder instead of a flywheel to drive the ram, and they can be either valve controlled or valve and feedback controlled. Valve-controlled machines typically allow for a single stroke operation, allowing the ram to move up and down in response to commands.

The ram can be proportionally regulated to within set points using controlled feedback systems. This gives the ram more control over its stroke and enhances punching rates because the ram no longer has to complete a full stroke up and down but may instead function within a very narrow stroke window.

Punch presses are big machines that have either a ‘C’ or a ‘portal’ frame. The hydraulic ram is located at the topmost section of the C type, whereas the portal frame is shaped like a complete circle, with the ram cantered within the frame to prevent frame deflection or distortion.