What Are The Programming Languages For Embedded Systems 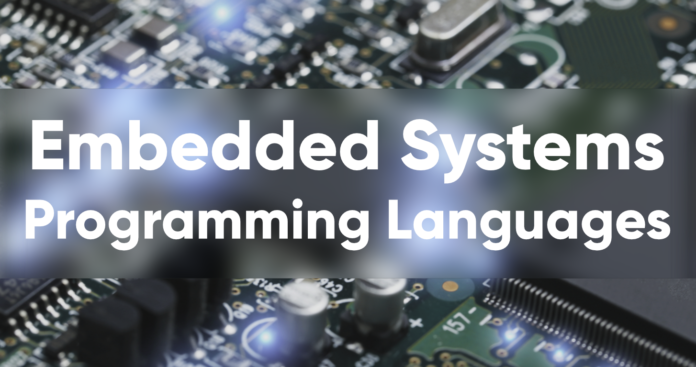 Everyone knows that hardware refers only to the physical parts of a system, whereas software provides instructions for operating the hardware. The term “embedded system” describes this integrated computer hardware and software type. Microprocessors and microcontrollers are examples of embedded systems, and they govern most of the digital environment in which humans now exist. Embedded systems are utilized in various electronic devices and mechanical applications.

There are numerous benefits of using programming languages for embedded systems.

C is the most popular language for embedded computer programming because of its efficiency. It is estimated that C is used to develop 80% of embedded systems. This standardized language is not dependent on any particular processor and can be taken elsewhere. It could be easily adapted to function on other systems.

Embedded C is just an expansion of the C language for creating microcontroller-based software. However, you must be aware of the distinction between C and Embedded C before you can get started with embedded computer programming using embedded C. While C compilers require a specific operating system, Embedded can run on any system. Comparatively, C does not rely on particular hardware, while Embedded C does. Media players, DVD players, and video cameras are just a few embedded C devices.

C++’s excellent stability has made it a popular choice for embedded systems development. C++ is widely used for embedded devices and the Internet of Things. It is essential to use caution when implementing real-time functionality in C++ for embedded devices. Allocating memory at program startup necessitates the creation of a memory pool from which further dynamic allocations can be made. The fact that C++ is an object-oriented programming language makes it portable and trustworthy.

Python is a relatively new programming language, but its simplicity has made it more popular recently. Unlike other compiler languages, an embedded Software Engineer can spend less time compiling while using Python because it is an interpreted language. Python is a free and open-source programming language emphasizing clarity and readability. As written, Python code can be run on any computer without modification.

By using Java in embedded systems, you could potentially reduce expenses. Most GUI applications with more than five screens are best written in Java. Java, like many other languages, is portable and dependable. It’s convenient because you can fix bugs from afar. The majority of web and mobile apps are written in this multipurpose language.

Ada has earned a solid reputation for its stability and security. Despite its complexity, Ada is the best option for real-time applications. Compared to Ada, C’s pointers can be used as integrals and data sets. C is not up to the task if you need to write millions of lines of code. Ada, on the other hand, would help you out with superior module structuring and encapsulation features.

The Benefits of Hiring Office Removals Services When Moving Your Business

This hoodie is part of the BTS Merch Store

Buying a Database in the UAE: An Overview

The Benefits of Hiring Office Removals Services When Moving Your Business

This hoodie is part of the BTS Merch Store

Buying a Database in the UAE: An Overview

A Guide to Database Providers in Dubai